The Place That Gave - Chapters 1 through 3 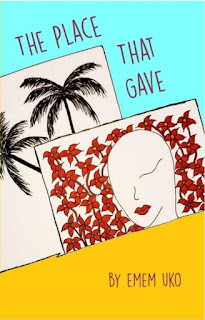 Theana Green, just like her name, loved color. During the day, she wore bright colored outfits with sky-high heels that were usually studded and at night, she favored anything with sequins. She had a buzzcut, red dyed hair, which exposed a perfectly shaped rounded head on a long neck.
She was gorgeous and her symmetrically spaced brown eyes, paired under a nicely arched full eyebrows. Her forehead rose in proportion to her face, leading the way to a tiny button nose with rounded cheeks on both sides of her nostrils. Her full lips were always clad in different shades of pink and red, colors that have grown accustomed to her dark cocoa complexioned face. She had a trickle of darker moles that etched around her nose like star constellations. Although her skin was smooth and her figure was slim and toned, she would not credit it to healthy eating; she only ate what she could afford and drank an unacceptable amount of water to help curb her hunger. She was thankful that her breasts and hips did not succumb to reduction whenever she slimmed down. She was of average height and in almost every aspect a sight to behold, the exception being her need to crack her knuckles loudly when she was nervous, and while she no longer did it all the time, she couldn’t help doing it at pivotal moments, which were always moments that made her anxious.
As she watched the doors and gates of the stores in the Galleria open from where she sat, Theana folded her hands into fists to resist the temptation to crack her knuckles. Placed on the bench beside her was the letter she received yesterday that read:

We are sorry to inform you that you can no longer continue as the ambassador of Health Trix. Due to an unforeseen circumstance…