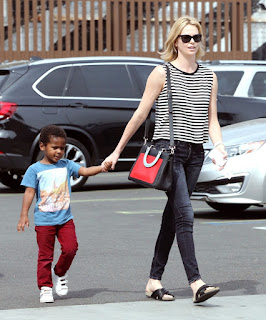 I want to believe that the person who wrote the article calling Charlize Theron a 'monster mom' is a PHD holder in Super Nanny. Her kid threw a tantrum in public and she grabbed him instead of letting him roll around and that is now grounds for being a monster. This unhealthy fascination with celebrities plus the shock when it finally dawns on us that they're humans just like us feeds a part of us that makes us judgmental. We have to be careful about that behavior. We sit on our moral thrones because our lives aren't as advertised. We see pictures and are quick to speculate and make conclusions.
I was so annoyed because I'm usually around kids and kids will always be kids. They don't care if you're the paparazzi or the President. They will act the way they feel in that moment. It's the constraint and the understanding of the adult that will help the situation. Maybe we expected Charlize Theron to just laugh at the situation or ignore it completely. Well boohoo, she is a mother and your own parental decision doesn't apply to her. Are you aware of what set off the tantrum? Do you know if one of those annoying camera-wielding individuals did something to create panic?
If there's a real problem, let the right people take action, not trolls that think they have a right to write nonsense on their blogs because they think they know what's best. Yes, Ok Magazine published photos and behold, the mom-shaming of Charlize Theron began. Guess what? a psychotherapist was asked about the situation and here is what she said, "She's got to find out what's on his mind by asking him and letting him talk about his feelings, not dragging him around." After reading this, I was left wondering if this Dr. Gilda has met a four year old throwing a tantrum who will settle down and talk about his feelings. Wonderful advice, doctor, because that four year old is clearly thinking logically.