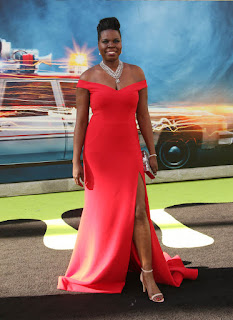 How hot does Leslie Jones look in the photo above? This is a face we know in the world of comedy and you would think that as popular as she is, she can get favors from designers. I thought so, until I read her tweet about designers refusing to dress her for her event. Say what?


Leslie Jones ‏@Lesdoggg  Jun 28Manhattan, NY
"It's so funny how there are no designers wanting to help me with a premiere dress for movie. Hmmm that will change and I remember everything."

I have heard this same complaint before and it was from a plus size celebrity. One would think that a reasonable designer would catch the opportunity and exclusively design outfits for the celebs who clearly need their service. It is shocking to hear that that is not the case. These designers are so bent on making mannequin-sized clothes that if you happen to find anything that fits you, yay, lucky you.

The funny thing was that when I read Leslie Jones' complaint, the first designer that came to mind that could rectify the situation was Christian Siriano. He is known for making gorgeous clothes for celebs of all shapes and sizes. In fact, whenever you see those celebs in his designs, they exude a level of confidence that you immediately know that the clothes were made specifically for them. How are other designers missing out on this opportunity? Then guess what? I saw Christian Siriano's reply to Leslie Jones and all was well in the world.
Fast forward and you see the photo of her in that red dress. Yes, that's a dress designed for her by Christian Siriano, which he describes as, "Simple, elegant, and chic!"
This situation has got me thinking about how celebrities who face this size discrimination from designers can use it to their advantage. There are upcoming designers out there who would be in the heaven if a celebrity wore their designs. Celebs could just tweet or post about needing a dress and viola, I'm sure they'll get a bunch on their doorsteps. Then they can in turn, open doors for the aspiring designers by mentioning and thanking them on the red carpet.