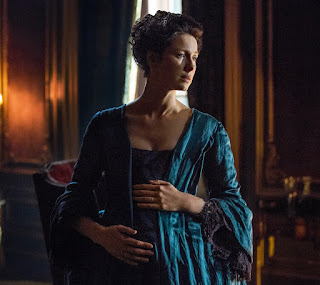 What does it mean for an honorable man to go back on his word? We are faced with knowing that the repercussions of Jamie’s act of going back on his words are great. At the end of episode 6, we were left off with Black Jack injured in his lower extremities by Jamie, which poses the question of how Frank would exist if Black Jack is unable to get Mary Hawkins pregnant. Jamie was also arrested because of his dueling. In the process of this, Claire suffers a painful issue with her pregnancy. She watches in betrayal, how the man she loves went back on his word and cause another man dear to her heart to cease to exist.
From season 1, we know how greatly Claire and Jamie held their words and promises. Going back on a word can be very dangerous, as we saw in episode sixteen of season 1, when Claire’s capture by Black Jack puts Jamie and his men’s lives at risk. This event would have been avoided if she had just stayed put. 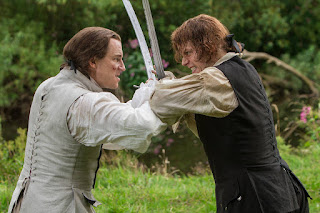 Now Jamie has gone back on his word, an ultimate betrayal to Claire because she doesn’t know why. Those who have read the book know why, and episode 7 might tell us why, but we can tell that it has something to do with Jamie’s visit to the brothel to take care of Prince Charles’ debts and Fergus going into that room that had the hanging red coat. In fact, Fergus’ reaction tells us who the owner of the room belongs to because Black Jack’s smirk is not one that anybody, let alone a child, could smile over.

Best Laid Schemes was heart-wrenching and a lot seemed to have gone wrong at the end of the episode. I’m left sitting at the edge of my seat as I wait for the next episode because the trailer only made me more anxious. I’m wondering if Claire would ever forgive Jamie for putting Frank’s existence in jeopardy.